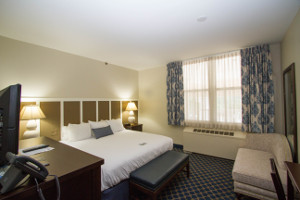 In the heart of the Blue Ridge Mountains in scenic Lake Junaluska, North Carolina, you’ll find a historic hotel built in 1921. Lambuth Inn, named initially Centenary Mission Inn, was established as a restful and renewing location for missionaries returning to America from trips from all over the globe.

Lambuth Inn, now owned by Lake Junaluska Conference & Retreat Center, recently overwent a massive $3.2 Million renovation, impacting almost every area of the hotel. The guest rooms have been entirely transfigured back to their former glory with new carpet, furniture, beds, lighting, and furnishings.

The dining room, a truly marvelous space with breathtaking views of the sky blue Lake Junaluska, offers mouthwatering cuisine and a family-friendly atmosphere. The dining room also received new flooring, chairs, and window treatments, as did the meeting rooms.

Lambuth Inn has always been more than just a place to lay your head down—you’re invited to become inspired by the history and marvel at the renewal. The Lake Junaluska and Blue Ridge Mountain views at Lambuth will melt hearts, especially from the elongated porch. Take a stroll to Inspiration Point, a beautifully pristine garden with stunning birdseye views of the lake and surrounding mountains. The gardens, featuring 30 different species of plants, are an ideal location for meditation, relaxation, and wonderment.

"Lambuth Inn is not like any other inn or hotel," said Executive Director of Lake Junaluska Ken Howle. "The renovations have included many of the typical updates you would find in an inn, including new carpet, freshly painted walls and new beds. But by far the most important outcome of the renovation is the true reason why Lambuth Inn exists at all. Lambuth Inn is a place where memories are created, a place where family members unite, where meals are shared and where the problems of the world are solved while sitting in a rocking chair on the front porch. It is a safe haven, a place apart." 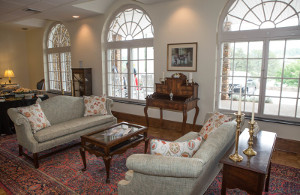 Lambuth Inn is on the National Register of Historic Places and was the first building in Western North Carolina to be integrated. Lambuth Inn received its name after Bishop Walter Russell Lambuth, who helped establish schools and hospitals in China, Korea, Japan, Poland, Serbia, and Congo. The inn has housed many famed guests, including Jimmy Carter, Eleanor Roosevelt, John Glenn, and Richard Nixon.

What’s a Lake Junaluska getaway without a week of adventure and excitement? Lake Junaluska has stand-up paddleboards, kayaks, and canoes for rent, as well as complimentary access to tennis courts, an outdoor pool, and sand volleyball. You’re always just a short stroll from their conveniently located golf course, 16 gardens, and a 3.8-mile walking trail. Your stay at Lake Junaluska Conference & Retreat Center's Lambuth Inn will replenish your mind, body, and soul—witness the incredible transformation for yourself!

Lodging in or near Lake Junaluska

The Terrace at Lake Junaluska

Yogi in the Smokies

An Eclectic and Luxurious Winery Resort in Canton, Ohio