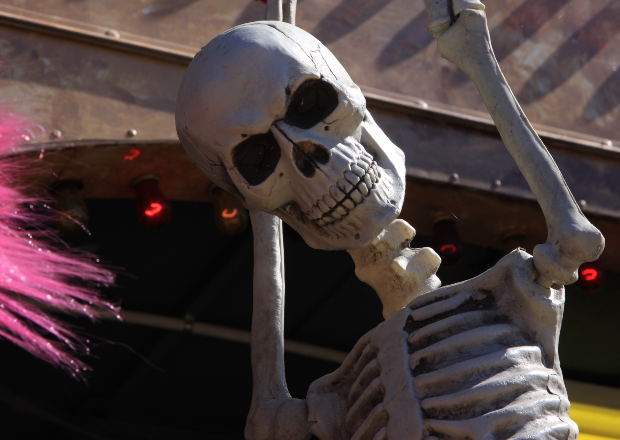 From September 20th through November 2nd this year at Universal Studios Halloween Horror Nights, AMC’s “Walking Dead” hungrily shamble from all directions and extinguish all hopes of survival. The zombie-themed horror fest is bigger than ever, put together by the most sick and twisted minds in the genre. All new scare zones are designed to petrify, featuring monstrosities from horrifically popular films, television series, and music such as “Insidious,” “Evil Dead,” and Black Sabbath’s number one billboard album “13.” Universal Studios cranks the terror to a level never seen before with the use of the world-famous Hollywood movie production backlot as the frightening backdrop of this years morbid mischief.

Mazes modeled after your favorite movies and television series will have you trembling in a fear coma, if you make it out alive, that is. The Walking Dead: No Safe Haven features the iconic prison safehouse, and some of Executive Producer Greg Nicotero’s favorite zombifying scenes. If you make it out, and you’re still human, face certain death in the Terror Tram, another walker trap filled with your worst nightmares. Only the bravest will discover the Governor's terrible secret. Universal Studios, the self-proclaimed inventor of the horror genre, is very passionate about chilling you to the bone with the sights and sounds of unnerving monsters and copious gore, and does not allow children 13 or younger to enter the festival. For those above the age limit, enter if you dare.

Summer Fun in the Land of Love

An Immersive Spa Experience in Ontario

Fall Season Relaxation and Romance in the Poconos

Ring in the New Year at a Premiere Michigan Resort